A deadly battle took place, but even though the Gods were victorious over the Giants, Svipdag was the real conqueror.

His marvellous sword, bright as the sun, slew just as many men as Thor's hammer did Giants.

Svipdag fought a duel with Halfdan.

Halfdan's mighty club shattered into tiny pieces, as if struck by lightning, and his byrnie split apart so that he received a deep wound.

Thor then threw his mighty hammer against Egil's son. The hammer did no harm to Svipdag and returned to Thor as powder.

Thor himself was forced to retreat. He carried the wounded Halfdan onto a cliff-top, wherefrom he threw huge boulders over Svipdag's army.

Svipdag did not wish to wield his weapon against Njörd and Frey, so he retired from the battle. 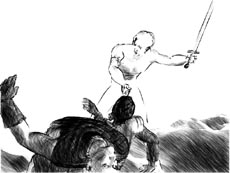